Also known as parallel execution, parallel testing tests different modules or applications in several browsers simultaneously instead of executing tests one by one. The objective is to reduce the time it takes to run tests.

The opposite of parallel testing is sequential testing, where tests are run one by one. This testing approach takes up more time, resources, and effort.

How Does it Work?

In parallel testing, a QA engineer executes two or more versions of a software at the same time using the same input or testing method. Alternatively, a single software version can be performed simultaneously on several devices or a combination of browsers and operating systems.

Is Parallel Testing as Precise and Complete as Sequential Testing?

Parallel testing is even more precise and complete than sequential testing. The latter has been the standard in software development and other fields not because it is superior to other types of tests but because in many ways, it is still the easiest and most practiced way of organizing and running tests.

How Does Parallel Testing Work in Selenium’s Automation?

Parallel testing in Selenium is a process that allows the same tests to be executed simultaneously in different environments. The main objective of running parallel testing is to reduce the time and effort required to run automated testing in the browser while at the same time guaranteeing quality by using the Selenium Grid. 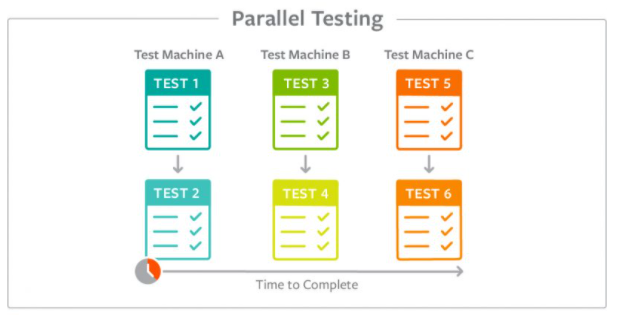 When Should Parallel Testing be Applied While Using Selenium?

Parallel testing can be applied in the following scenarios:

Executing faster tests and a higher number of tests results in more frequent software version releases and increases the number of detected errors. The math is simple. Parallel testing can prevent delays in delivery without compromising quality, making it superior to sequential testing. It also reduces quality assurance expenses as well as the cost of failed tests. Additionally, it optimizes processes and improves scripts continuously to obtain more accurate results. Finally, parallel testing reduces the risk of a client dissatisfaction due to an application’s quality.

If you are looking for a software partner who will work towards your business goals and success, then Avantica is your solution. We offer dedicated teams, team augmentation, and individual projects to our clients. We are constantly looking for the best methodologies in order to give you the best results.

3. Balancing your Jenkins Workload on a Master/Slave Setup.

We want to know you better

We want to know who our readers are in order to provide you with the best Insights content.


to Avantica’s Insights!
Look forward to our posts on the latest technological trends, software solutions, and digital news. Check your email for your first update! You will now receive notifications on a monthly basis.
Thank you for subscribing!